Weather satellite in the atmosphere

The idea for Aerolabo originated within the scope of the youth activities of the FGYO in the balloon sport. In principle, it is no new idea to carry out measurements during a balloon flight. Already with the first flight of a manned gas balloon in 1783 were a barometre to the measurement of the atmospheric pressure and a thermometer on board. - however, the today's possibilities of the at a reasonable price available telemetry are new.

Today one could combine, for example, an single-board computer like Rasperry Pi, Arduino, or similar with an enlargement package with the measuring feelers which there are under concepts like Sensor Box with a radio module (mobile Internet, ham radio) and produce a data connection about a gateway on the Internet - and data like remote control orders of every point in the world send and receive. And this can be realised in to an amount less than 200 EUROS where still few years ago costs would have originated which one could hardly have raised privately. And the Aerolabo would also not weight any more than the anti-collision lights which we hang under our basket.

Our can use out of the box solutions for Sensors like offered by Pasco: https://www.pasco.com/

Or simply become an airborne station in the AirPi project.

However, the called examples of a possible implementation and construction of an Aerolabo are not meant strictly - let your creativity free run, there are not mental bans.

Since Canadian students have shot photos from the stratosphere with the help of a weather balloon, have taken as an example to themselves a row of school projects this experiment, and have begun similar projects. So many that there are, in the meantime, commercial suppliers for the required parts.

We are on the move with our hot balloons and gas balloons not completely so high, not in the stratosphere on the edge of the universe, but in the troposphere. But heights to about 6000 metres are absolutely possible - a height already the first German aeronaut, Friedrich Wilhelm Jungius reached. But also in the troposphere there is to discover a lot, and in the troposphere the weather events happen. And to use a manned balloon for a project offers above all an advantage: If a light project, the Aerolabo, in a flight is carried along which is operated anyway, no additional costs originate, the Aerolabo can be taken free of charge. Also an experiment one would like to send later in the stratosphere, if one could test first of all with a manned balloon.

The gas balloon was the Space Shuttle for the airspace - the Airspace Shuttle from the 18th to the 20th century, with it the atmosphere was explored - how on the scetch by H. Gross on top illustrated. Today the manned balloon ride plays no more role in the research, but she could play a role in the area of the education again - learning by discovering.

Aerolabo is first of all not project itself, but an idea for projects. Our idea is that the free balloon can be a carrier system of your projects. To make projects from the idea, now it needs your ideas.

From the idea for the project

If you have developed your projects for an Aerolabo, it is a matter of examining like it can be brought best of all with the carrier system balloon in the air. We would establish in addition the contact with aeronauts - according to project to gas or hot-air balloon operators. And if you want it, we well help you with our competence in an advisory capacity aside. Further we offer to introduce your projects here on the platform balloonwiki. Further we pursue in our field of work a private Wiki for the internal exchange between the project partners.

For practical reasons, as carrier systems could be used the numerous hot air balloons or the rare gas balloons. 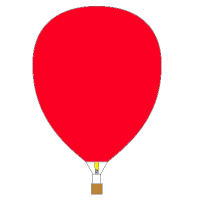 The advantage of the hot-air balloons lies in the fact that one can load the complete system including the required heating gas, normaly propane, on a vehicle, and with it can drive where one would want to start. Worldwide probably several ten thousands or perhaps some hundred thousands flights take place yearly. Disadvantage of the hot-air balloon is the length of the trip restricted to few hours, and that it influences its ambiance more than the gas balloon because of the burner and the air heated with it. It is a matter this to consider with all measurements directly or indirectly depends on the air temperature. 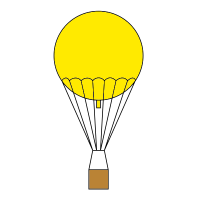 The big disadvantage of the gas balloon lies in the fact that the lifting gas necessary to fill it is not available everywhere. It is possible to transport it, by trailer, but this raises the price of the start extremely. Start places that are connected to a gas pipeline exist at the moment only in Germany, and one in Switzerland. Here it goes to the overview of the gas balloon start places: Advantages of the gas balloon are his longer length of the trip - from two to three days are possible with suitable weather conditions - and that he influences its ambiance less.

Here as an example flight report, flight distance and height diagramme of a gas balloon ride from Stuttgart to Slovenia. There are more examples in the column journey reports. And as such a gas balloon is flown: Howto fly a gas balloon. 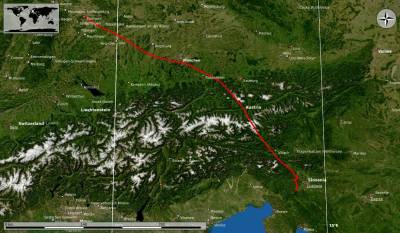 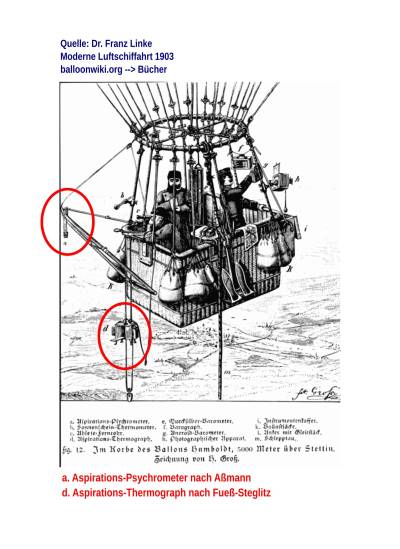 The picture shows again the drawing with the basket of the gas balloon Humboldt and its instruments. The aspirated psychrometer and the aspiration thermograph are encircled red. Both are right beyond the basket, so that the measurements take place beyond the area by the temperature of the basket influenced air. Namely the aspirated psychrometer in a rack on eye level to be able to read it during the journey with the help of binoculars. And the aspiration thermograph hangs below the basket.

With the ventilated instruments by which a ventilating fan leads constantly an airflow in the measuring feelers, and which are protected extensively against radiation exact measurements can be carried out. And with the gas balloon one meter of distance also reaches aside or down to minimise the influence of the basket on the air temperature. However, with the hot-air balloon is not known in which vicinity he influences the air temperature.

Your project - our support

Searching for a balloon partner

If you already have an idea for a project “Aerolabo”, it is a matter for you of finding a “balloon partner”. If you yourselves nobody know you can ask, you can ask us - then we would look for you for a partner. Easier you contact us about aerolabo@balloonwiki.org. You find other contact data here: Contact

Presentation of your projects

If you deliver material to us, we present with pleasure your projects here on the platform balloonwiki.org

In our field of work we have own Projekt-Wiki “aerolabo”. Here one can exchange himself privately, documents deposit, and also collect material for future presentations.

Don't hesitate to ask us!

Also today balloons are on the move still for the science, indeed, as far as to us famously only unmanned or as chain balloons. Research balloon

ScienceNewsforStudents: Teachers launch weather balloons, and a passion for science

The application most spectacular probably at the moment is the Arctic expedition MOSAIC.

Report on test of a captive balloon of the company Balloon construction Wörner near Torgau for this expedition:

The Arctic stratosphere Report on researches to the ozone layer over the Arctic:

Solar observatory In big height one can observe sky body with only minimum influence of the terrestrial atmosphere:

Except where otherwise noted, content on this wiki is licensed under the following license: CC Attribution-Share Alike 4.0 International